Wow, it seems like only four years ago that I stood outside on my back porch after another insane night of bath time madness and hilarious bedtime buffoonery and took an exhausted breath, cracked open a beer and lit a smoke and wondered how anyone ever thought having a kid was normal, and why there wasn’t a show about all of this crazy shit that happens to you as a parent, as a dad…as a man. So I started writing one with a friend of mine, with no idea what to do with it or even if I would finish it.
When Siobhan McCarthy, who had also just had a kid, heard through the grapevine that I was writing, she asked me to pitch it and she immediately offered to produce it. So it began.

Well the show has changed a lot since those early scripts, it’s no longer called DADS, and it’s no longer just about being a dad. In fact, the show has grown, like our kids into something, I think more interesting. Something more palpable, because as we dove in to make this thing we realized the themes we wanted to write about were bigger than just how to deal with your kid’s first bath turd (though always hilarious and yes, I still have a picture), they were about who we are as people. They always say write what you know, so we did.

PARKED is about a group of friends still trying to figure it out. They are caught somewhere between who they were and who they need to be. they are PARKED. Some have done the right things but don’t feel like they got it right. Others don’t really even know what right is. And just because you have a child doesn’t make you an expert on anything. But life is filled with comedy. And sadness. And longing. And failure. And success. Hopefully the friendship between the characters and the moments in the show capture some of that. 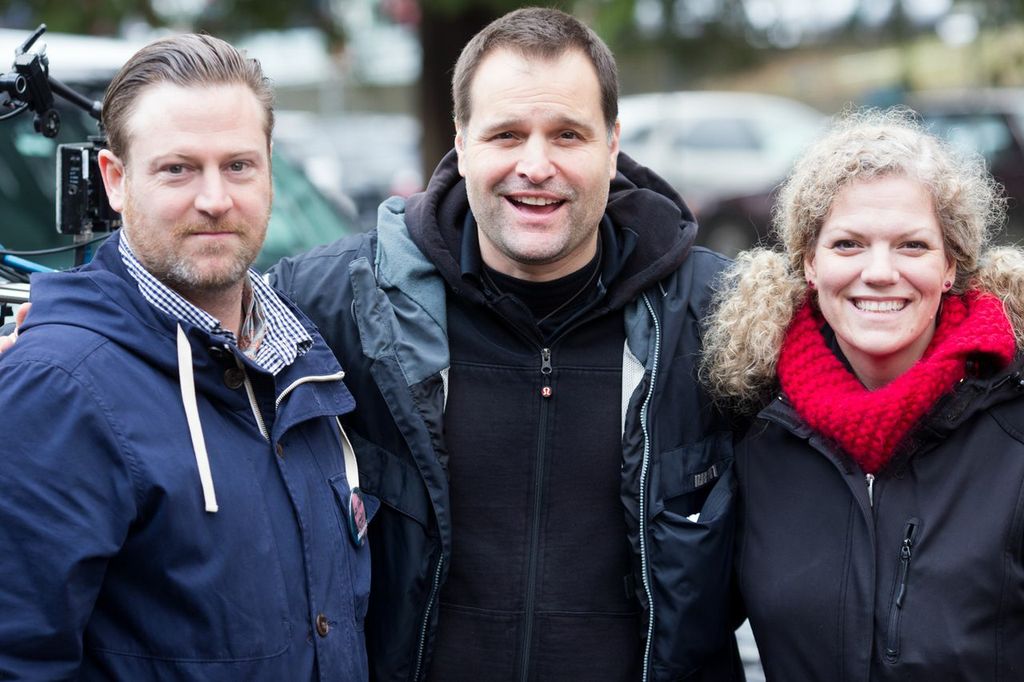 I am an artist. A creator by nature. A multi-hyphanite. I used to write every day. If I didn’t write, I was miserable. It was my way of processing and expressing myself. I have penned plays in a night, and then workshopped them for years before producing and performing them. Others, I have created on my feet whilst performing in my clown. I have filled copious journals with poems, scenes, random thoughts and pages of dialogue.

When I became a parent, my creative juices as a writer wained. Who has time to write when you find yourself whole heartedly committed to attachment parenting?

When Adam‘s wife told me that he was writing a show about the comedy of parenting, I was more than intrigued. For the first time, since the birth of my son, my creative juices began to flow. Inspired, I optioned, DADS in April 2010 and immediately began developing the concept of our show with Adam.

I also began to wean my boy, so I could attend Banff and start pitching it to broadcasters. I will never forget leaving Banff on a complete high, confident and assured that we had a hot property on our hands. The ridiculousness of parenting was celebrated and driven home even during my pitch sessions as my body betrayed me, and my breasts leaked in the most inopportune moments.

Fortunately, being a clown and celebrating the ridiculousness of life, enabled me to forge ahead and embrace the comedy of parenting irreverently. It also enabled me the opportunity and the courage to pitch our director Peter DeLuise.

Peter had hired me as a clown to perform in an episode of the Haunting Hour that he was directing. I spent two days on his set, in complete awe of him. He is a genius. In my clown, between takes, I found the courage to ask him for a meeting. Graciously he obliged and after meeting me for a coffee, he agreed to direct our show. Having Peter attached changed our game entirely. Every actor and crew member in town is chomping at the bit to work with Peter. He’s simply that amazing. Doors that I once thought were closed, began to open.

In 2012, we received the highly competitive interactive fund from BC Film + media, and then leveraged the success of our 1/2 pilot to secure the IPF in 2013. We used the platform of the CFC media lab’s ideaBOOST program to identify our super fans and then launched our indiegogo crowd funding campaign to help close our gap in financing. Through sheer passion, tenacity and community support we were able to produce the next six months of content that we look forward to sharing with you.

I would like to take this opportunity to thank my producing partner Tracey Mack and all of the wonderful people who have supported us in our journey. Big thanks to our families, cast, crew, friends and you our audience.

As our success is measured in views, we hope that you will please share our episodes with your community so we may continue making PARKED.