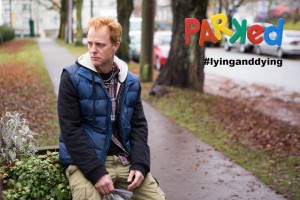 In an epic parenting fail, things immediately start to unravel as Jesse (David Lewis) races home after realizing he has forgotten his kids. But the hungover journey is not the worst part. That comes when Jesse ends up face to face, with Peter (Peter Benson) his ex, Kim’s (Julia Benson)new dude. Will he get away with it? Will he be broken? How strong is the “Bro’ Code?” And where do you keep your pizza five?

Oh hello again, it’s odd we keep meeting like this. Perhaps it’s my musky cologne that draws you back to that which feels forbidden.

So here we are with our second full PARKED episode “Lying and Dying, which I wrote. Unless you hate it then Adam Thomas or Gorrman Lee wrote it.

This was the first full episode I wrote and it came to me quickly. About 6 hours for a first draft. Our creative team had fleshed out a basic idea of what we wanted to happen in this episode and then I sat down and stitched it all together. As an actor I’ve worked on a LOT of shows over the years, some good, some bad, and the thing I find that sticks out for me is bad shows tend to over write. Writers fall in love with their words or feel the need to explain themselves to the audience. I like to write. Reread. Edit. Rewrite. Reread. Edit etc. I really try to pare as much down as possible. Unlike this lengthy blog. 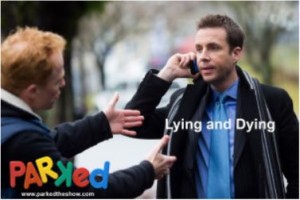 I was very excited about writing for Julia and Peter Benson. As I’ve said before, I love them. They are both very talented, adept at comedy and easy on the eyes. Grrrrrr. Peter and I are usually auditioning against each other so it was great to be in an actual scene with him. He crushed it. And Julia just scared the hell out of me. She’s so damn good.
( Quasi-interesting note: As Peter steps away from the car he awkwardly steps down into the gutter then back up onto the curb. We had a laugh about it after. Then we hugged.)

And lastly Mr. Matty Granger (Josh) He keeps saying that he isn’t really a full on actor but then he keeps stealing all the scenes he’s in. So what the hell’s the deal with that, right?

The stuff with Matt and myself on the bike was shot the first weekend, while the car scene was shot 2 weeks later. It snowed between those weekends. Needless to say we were somewhat concerned about continuity. But then I sacrificed a virgin or something, the snow melted, and we were good. 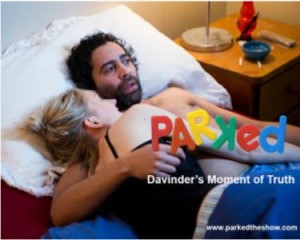 Remember how you found out? Was it in a car? The kitchen? Over the phone or right after an orgasm? Christine (Sonja Bennett) lays it all out for Davinder (Sean Amsing) and expects some excitement in Davinder’s Moment of Truth!