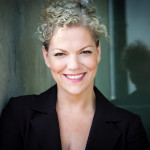 Toronto, ON – Women in Film & Television – Toronto (WIFT-T) is pleased to announce Siobhan McCarthy as the recipient of the 2014 WIFT-T Banff World Media Festival Scholarship, providing one WIFT-T member with mid- to senior-management experience, with a full delegate pass to attend the Banff Media Festival, June 8 – 11, 2014.
“WIFT-T is very pleased to partner with BANFF for this scholarship for a second year,” says Heather Webb, WIFT-T Executive Director. “The Banff World Media Festival will provide Siobhan with exceptional business development and career advancement opportunities.”
The scholarship helps fulfill part of WIFT-T’s mandate, which includes providing opportunities for members to connect, learn and advance their careers in screen-based media.

Award winning film and web series producer, S. Siobhan McCarthy, is the CEO and Executive Producer of blyssful PRODUCTIONS and red trike media inc. She is the co-creator, Executive Producer and showrunner of the web series PARKED, which is currently on the festival circuit. PARKED received funding from the BC Film + Media Interactive Fund, the IPF and Creative BC, and was a part of the CFC Media Lab’s ideaBOOST Affiliate Program. DOWN HERE, her first feature film, premiered at the 2013 Whistler Film Festival. As an innovative, transdisciplinary artist and educator, Siobhan has also produced WAM, BC’s first international disability media festival through Kickstart Disability Arts when she was the Co-Artistic Director. While there she Executive Produced five short films including WILL, that won the Golden Sheaf at the 2013 Yorkton Film Festival and PATIENCE AND ABSURDITY, which represented Canada at the Paralympics Games in London in 2012. Siobhan has been the Production Manager of the Vancouver International Film Festival Forum for over a decade. She has a slate of film, television, and web properties in development.

You can view the WIFT press release here

“I’d like to take this opportunity to thank WIFT for this wonderful opportunity.  I would also like to thank Maureen Levitt and Andra Sheffer for their letters of support, and mentorship over the past year whilst I’ve been making PARKED”  S. Siobhan McCarthy