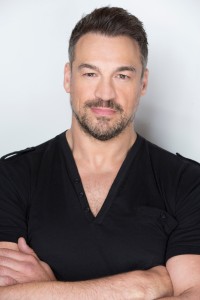 Aleks Paunovic recently completed filming “Percy Jackson and the Olympians: The Sea of Monsters” for 20th Century Fox and was nominated for a Jessie Richardson Theater Award for his leading role in the Vancouver stage production of “Danny and the Deep Blue Sea.” Paunovic recently had a standout comedic turn opposite Tom Hardy in the Fox comedy ”This Means War” and he recurs on the CBC series “Arctic Air”.