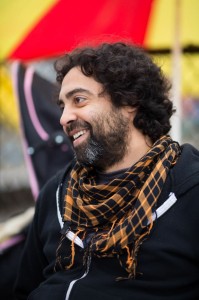 Davinder (Sean Amsing) is the father to a single boy. An underground hip hop performer and musician, Davinder is over-confident and under-successful, and sees himself as a star to be discovered. He sees the “man” (i.e. recording industry) as being out of touch for never taking him seriously, let alone taking his calls. A full-blown pot smoker, he has cultivated a stoned-out West Coast rapper persona and has tens of fans on the Internet. While his life is seemingly fairly easy – he has a supportive and bread-winning wife – his burden is that his kid is a total puker.