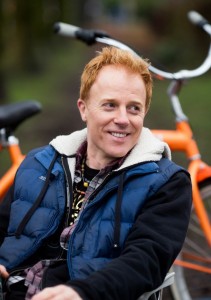 Jesse (David Lewis) is a single dad to accidental twins, one boy and one girl. Lacking in motivation he works as a bus boy at a local bar and often works and drinks far too late. While he might have a dream of running a bar, his failure to commit or dedicate himself to anything for too long has led him to a place of constant almost-poverty. This lack of focus has contributed to the breakdown of his relationship with ex-girlfriend Kim – the mother of his kids. While he emotes a bitter and resentful persona, he secretly wants to be a good father, even rekindle the romance with his ex; he just can’t seem to figure out how.

Highlights: Knows how to mix a mean drink, is good at parties, knows lyrics to every Beatles song.
Lowlights: Can’t play an instrument, stays too long at parties, will take his shirt off anytime anywhere.